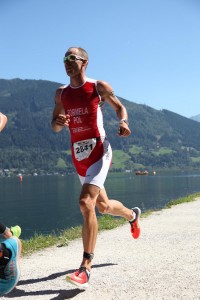 This race was the main goal for the second part of the season. Thinking of my form for this race I was forced to resign from another Ironman 70.3 which was held in my city, where the start line was located in front of my flat, so it’s so called sacrifice 🙂 I am very pleased with my achievement in Zell am Sell, because it shows me where I am comparing with the best guys in the world. Definitely it was the toughest race I have ever finished and full of nice memories. From technical point of view everything was very well planned and organized. The most important issue were the feeding zones. When the temperature reaches 35 degrees of C. water is the only thing you are thinking about, and they were ready to ease your run almost perfectly.

Usually I don’t like to be too early before the race, because It makes me

thinking too much. I prefer to make it as short as possible. Having race day on sunday I came to Austria 3 days before, because of my coach Jakub Czaja, who was all the time supporting me.  We spent that time in the beautiful village called Rauris. It’s about 20K from Zell am See and the mountains around the hotel were almost calling me to run or climb on a bike 🙂 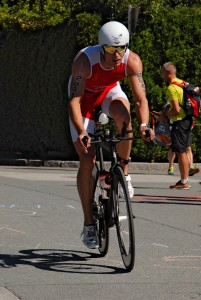 The race day I was feeling comfortable, highly motivated and ready to fight. In the contrary to some of my friends I didn’t feel any negative stress, and probably it’s because of me previous European and World Championships.  In the water I started very well and till the U-turn I was swimming all the time in the main group. This was the first time ever I have managed to stay in the group after the start 🙂 Unfortunately passing 1st km I had a few collisions with other guys, so It worse my pace and rythm. Anyway I’m very pleased with my perform because It showed me and my coach a significant progress in water.

During cycling I felt really good, so I didn’t want to force myself to the limits. I knew I 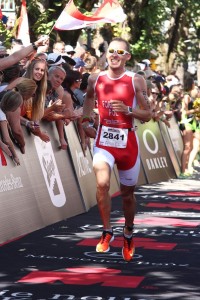 was riding fast and seeing how many people I had overtaken, I wanted to save more power for the running part. Looking now at the results I’m looking forward to another triathlon season because of 5min loose to the best PRO triathletes. I know it’s still 5min, but among age groupers it was 2nd the fastest time and I hope it will be better.
The bike course was really interesting and thrilling for me and there was everything what I liked as a former cyclist: climbing and courvy downhills 🙂 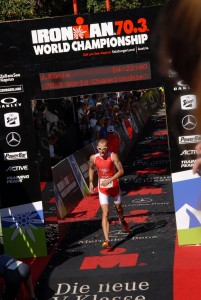 Before the last part I was hoping for a great result regarding on my running form before the race, and the overall time after the bike part. That time it was not so easy as it used to be 🙂 Probably havig one of the highest running form ever I’ve made the slowest half-marathon ever 🙂 It’s not a joke but the truth. Because of extremely high temperature my body didn’t cope with it. Strating 1st km with pace around 3:40min/km I slowed down to 4min/km instead of making it better. I don’t regret because I pushed myself to the limit and all the way long I was doing my best almost fainting after the finish line.

Now It’s time for a short rest and then I am planning to start a running season. Probably I won’t race too much but I am aiming to my first marathon in Frankfurt.