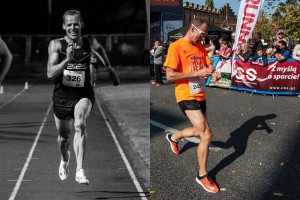 Having complited the 2015 triathlon season I started another mini season in running, to have my first marathon at the end of October in Frankfurt. On my way to success I’ve done two races so far. First step was the victory in the Warsaw Track Cup, where I set up my personal best on 5000m, which is now  14:45.59.  The second one was the Biegnij Warsawo 10k Run, where I finished 3rd among 9000 runners, and improved my result from 2012 when I was 21st.

After the Word Championship Ironman 70.3 in Zell am See I felt a little bit disappointed because of my the worst halfmarthon ever. It’s not about the time, but the huge discrepancy between the result and very high running form. That was the reason which made me higly motiveted a week after Ironman 70.3 to fight for the best result on 5000m. It was my first time in this kind of race, but I had been training quite often on a track to improve my running speed.

The race took place in Warsaw on the most popular track (because it’s free) called Agrykola.   Fortunately there was also my coach Jakub Czaja supporting me before and during the race. After the start I was running in the bunch for 3km and then successfully attacked and took the lead till the end of the race. Last kilometer took me 2:46, and eventually 5000m I made in 14:45.59. This result makes me more optymistic, because I am aware of my level and the level of the top triathletes in the world. 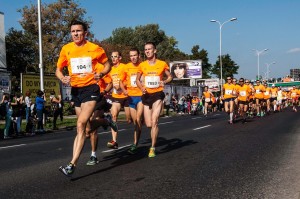 Last weekend I came back again to Warsaw to take part in the Biegnij Warszawo 10k Run. It was my second time in this race and 3 years ago I finished 21st. This time I was aiming for much more. On the start line I met top Polish runners, who are fighting for Olimpic Games in Rio 2016, so it was not easy to ignore them 🙂 As you see on the left, from the begining I was in the group, leading by Mariusz Giżyński. After 3km there was a little uphill, but strong enough to divide our group into two parts. Mariusz Giżyński was safe on the front and I was in the second group with 4 other guys. 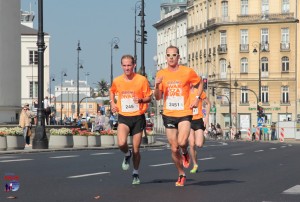 A few times I was hesitating to chase the leader or not.  I decided to keep the prerace instructions and attack after 8km 🙂 So I did like I said. You may see this moment on the right. It paid off, because in consequence there was one runner less and I could focus on the fight for the podium. Last kilometer was on a steep downhill, where proffessional runners are naturally faster than running cyclist or triathlete 🙂 This time I was not so bad, but in the end Jakub Nowak was a second faster than me. 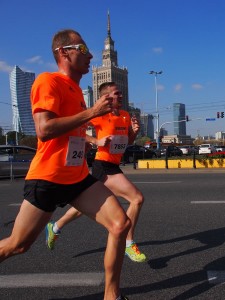 All in all I am really glad with this race and looking forward to my first marathon in Frankfurt. This will be my last race this year and will have a little rest. For sure I won’t be laying in a bed but doing it actively. At the end of November I am going for TATRA RUNNING Winter Camp, to spend a few days running in the Tatra Mountains under supervision of the best running coaches in Poland. Aparat pure mountain running we’ll be also enhancing technical skills on a track, including hurdles, and listening to lectures.